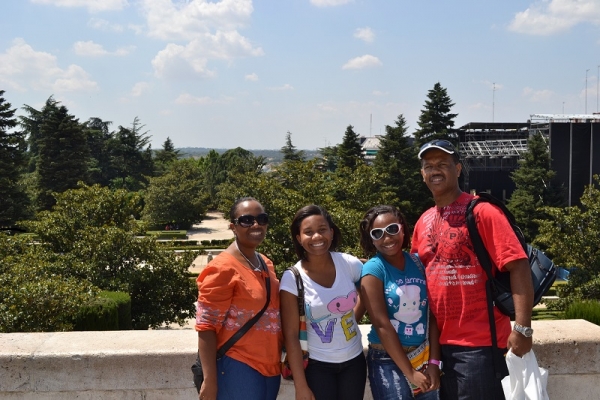 I was born in Jamaica and at fourteen years, migrated to the United States. Growing up in a Christian family, church and related activities were an essential part of growing up and I was taught, at an early age, to always trust God, regardless of the situation.I developed a passion for business and aviation pursued a career that would encompass both fields. I earned a bachelor's degree in Finance, an MBA in Aviation Management, and a Doctorate in International Business. Additionally, I was an entrepreneur, having founded two businesses. Armed with the degrees, and entrepreneurial experience, my goal was to be a researcher and facilitate international business, entrepreneurship and aviation management courses. I obtained a position as a professor at a local university and, as a researcher, often presented the findings of my research at aviation industry and academic conferences.

In April 2010, I was asked to facilitate a course in Montreal. Having traveled extensively, this was supposed to be a routine flight, and it turned out to be anything but. I tried to put my luggage in the overhead bin and was frightened when I couldn't raise my hands. That was the first indication that something was not right. Upon my return I went to an orthopedic doctor who assured me that I had "lazy muscles" and prescribed physical therapy that would fix it.As I diligently performed the prescribed exercises, I noticed that my legs, core and neck were getting weaker to the point where I had difficulty walking, sitting without support, rising from a seated position, and moving my head. I relayed these concerns with the doctor, and since he had no plausible answers, referred me to a neurologist.

I was relieved that the issue appeared to be neurological and certainly the neurologist would get to the bottom of it. I was poked, prodded, during the battery of tests were performed, and blood samples taken. With so many tests I was sure the neurologist would diagnose the problem and I was ready for the results on my follow up visit. When the tests yielded inconclusive results, he referred me to another neurologist and suggested I do a biopsy. Yet, another round of tests and the biopsy yielded inconclusive results. Both neurologists essentially shrugged their shoulders and said there was nothing they could do since they were not able to diagnose the condition.

During this period, the condition worsened and I was no longer independent and started relying on my husband to assist me complete seemingly routine tasks like getting dressed, preparing meals, and so forth. Determined to find the underlying reason for the muscle weakness, I visited yet another neurologist. The battery of tests were repeated and still yielded inconclusive results. The difference with the third, neurologist, however, is that she was intellectually curious and instead of saying she had no idea and leaving at that, she dug further. She discussed my case with a colleague she met at a conference and forwarded results to him.

He had an idea of what could cause the symptoms I experienced and wanted to see the samples from the biopsy. After three years of visiting neurologists, rheumatologists, internists, and orthopedic doctors,  we finally had a diagnosis: nemaline myopathy. It is an extremely rare genetic condition and the effects are usually visible at birth. When it occurs in adults, it is even more rare, and, more specifically, is named sporadic late onset nemaline myopathy, or SLONM. Nemaline myopathy is a muscular condition that results in weak  proximal, neck, respiratory and facial muscles.

By the time the diagnosis was made, I was in a wheelchair, could not raise my hands above my head, could not rise from a seated position, and had difficulty breathing. I was released from my position as a professor. Additionally, since I required 24-hour assistance, my husband was unable to work as he had to care for me and our two daughters. This was very difficult, to say the least. Within one week of the condition being diagnosed, I experienced respiratory distress, was rushed to the emergency room and was subsequently admitted. I was in ICU for two weeks, but was relieved that although I was their first patient, at least the doctors know what they were dealing with. I became stable enough and was released to a rehabilitation facility where I spent four weeks. Although I was unable to walk or be independent and required the use of a BiPap machine, at least I was in the comfort of my home.

As NM is a genetic condition, the doctors believed medication would not be beneficial, and that perhaps therapy would help. Somehow, though, I had taken predisone and found it helpful. I was then taking predisone, and since it was beneficial, the doctor thought it prudent to stay on it. Remember, though, I was the first and only SLONM patient of this doctor so she only review the literature and consult with colleagues in other states to determine the proper course of action.

The condition improved where I was much stronger and could more for myself. As fate would have it, the neurologist was assigned to a facility out of state and I was assigned another one. This one was not intellectually curious, and stated NM is genetic, medication does not help, and that predisone would be harmful in the long run, and took me off it. He was not interested in looking at literature where SLONM patients saw benefits from different types of treatment. He just knew I was the only patient he has seen with the condition, and since it was genetic was not interested in exploring further.

Once I stopped taking the predisone, the condition worsened to the point where I needed the bipap machine all the time, I got significantly weaker, and now had difficulty swallowing. My meals were restricted to liquid when I could take the machine off long enough to drink. I told the doctor what I was experiencing since getting off the predisone and asked to be put back on it or provide an alternative. He refused to put me back on, and stated there was nothing else that could help me.

Before long I was again in the hospital. This time I had emergency surgery where I had to have a trachea, and attached to a breathing machine. Additionally, since I had difficulty swallowing, I had to have a feeding tube. The situation was dim and I was not expected to make it. After three months in the hospital and two rehabilitation facilities,I was finally home. This time, I could not speak or eat! Communication was limited to texting and writing notes. My husband and daughters also learned to lip read during this time.

Still I had faith that I would pull through. I am alive because of God’s grace and as long as there is life, there is hope. I started seeing yet another neurologist, explained what had happened, and asked to be put back on prednisone. Recognizing the benefits I derived from being on it previously, he agreed to continue in an effort to stabilize me, while he consulted others for a plan of action for treatment.

I have improved a lot since being released and although I still have the trachea and feeding tube in, I am able to speak (much to my husband’s chagrin) and eat.

I have been on this journey now for seven years. I missed my daughter's high school graduation, award ceremonies in college, my younger daughter's volleyball games and track events, and sadly, my mother's funeral in Houston. Despite this, I have learnt to trust God more than I ever have. He has been faithful and I have not lacked anything. He provided me with an incredibly dedicated husband, understanding daughters, and supportive family and friends. This chapter is still being written and I continue to pray for strength to get through this challenge.

More in this category: All is Well »